Athens is the historical capital of Europe, with a long history, dating from the first settlement in the Neolithic age. In the 5th Century BC (the “Golden Age of Pericles”) – the culmination of Athens’ long, fascinating history – the city’s values and civilization acquired a universal significance. Over the years, a multitude of conquerors occupied Athens, and erected unique, splendid monuments – a rare historical palimpsest. In 1834, it became the capital of the Modern Greek state and in two centuries since it has become an attractive modern metropolis with unrivalled charm.

A large part of the town’s historic center has been converted into a 3-kilometre pedestrian zone (the largest in Europe), leading to the major archaeological sites (“archaeological park”), reconstructing – to a large degree – the ancient landscape. 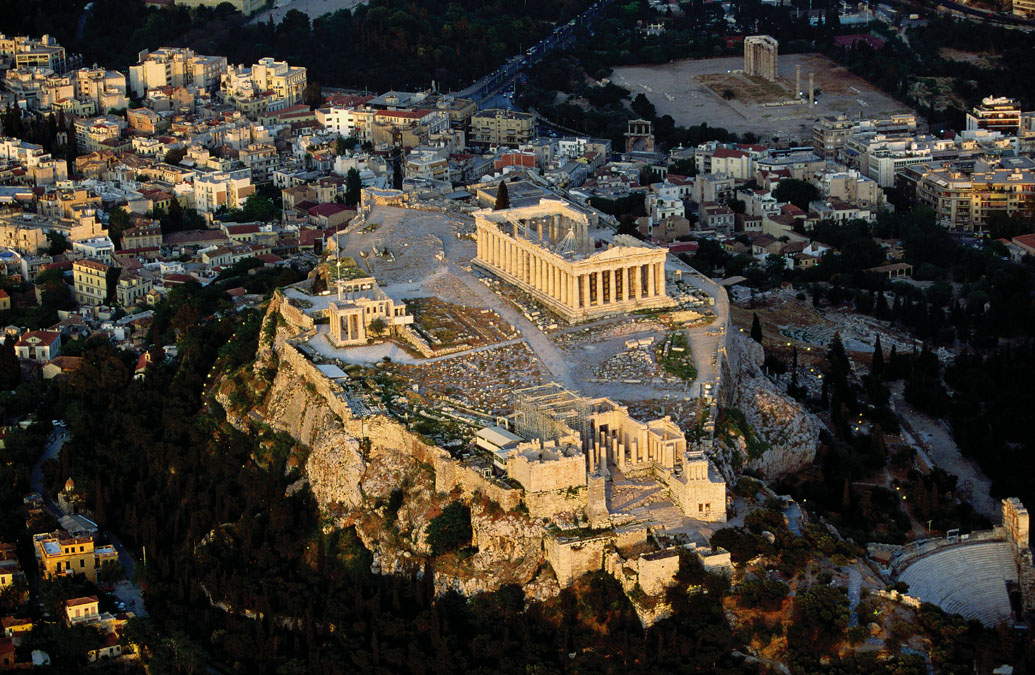 The tour starts at the temple of Olympian Zeus (6th c. B.C.), one of the largest in antiquity and close by Hadrian’s Arch (131 A.D.), which forms the symbolic entrance to the city.  From there, walking along Dionysou Areopaghitou Street (on the south side of the Acropolis) you pass the ancient Theatre of Dionysos (5th c. B.C.) where most of the works by Sophocles, Euripides, Aeschylos and Aristophanes were performed.  Continuing, you will reach the ruins of the Asklepieion (5th c. B.C.) and the Stoa of Eumenes (2th c. B.C.) and from there the Odeion of Herodes Atticus, which was built in 161 A.D. and is nowadays the venue for the performances of the Athens Festival.

From there you climb up to the sacred rock of the Acropolis, the site of some of the most important masterpieces of worldwide architecture and art, the most renowned of which is the Parthenon temple. In addition, other impressive structures are the Propylaea, the temple of the Athene Nike and the Erechtheion, while you must not skip a visit to the Museum, located close to the Parthenon.  Moreover, from the top of the rock you have an amazing view of the city.

Only 300m away from the sacred rock of Acropolis stands the impressive Acropolis Museum (www.theacropolismuseum.gr) , one of the most important contemporary works of architecture in Athens. It is made of steel, glass and concrete and it houses 4,000 priceless finds from the Acropolis monuments that represent its history and function as the most important religious center of ancient Athens. 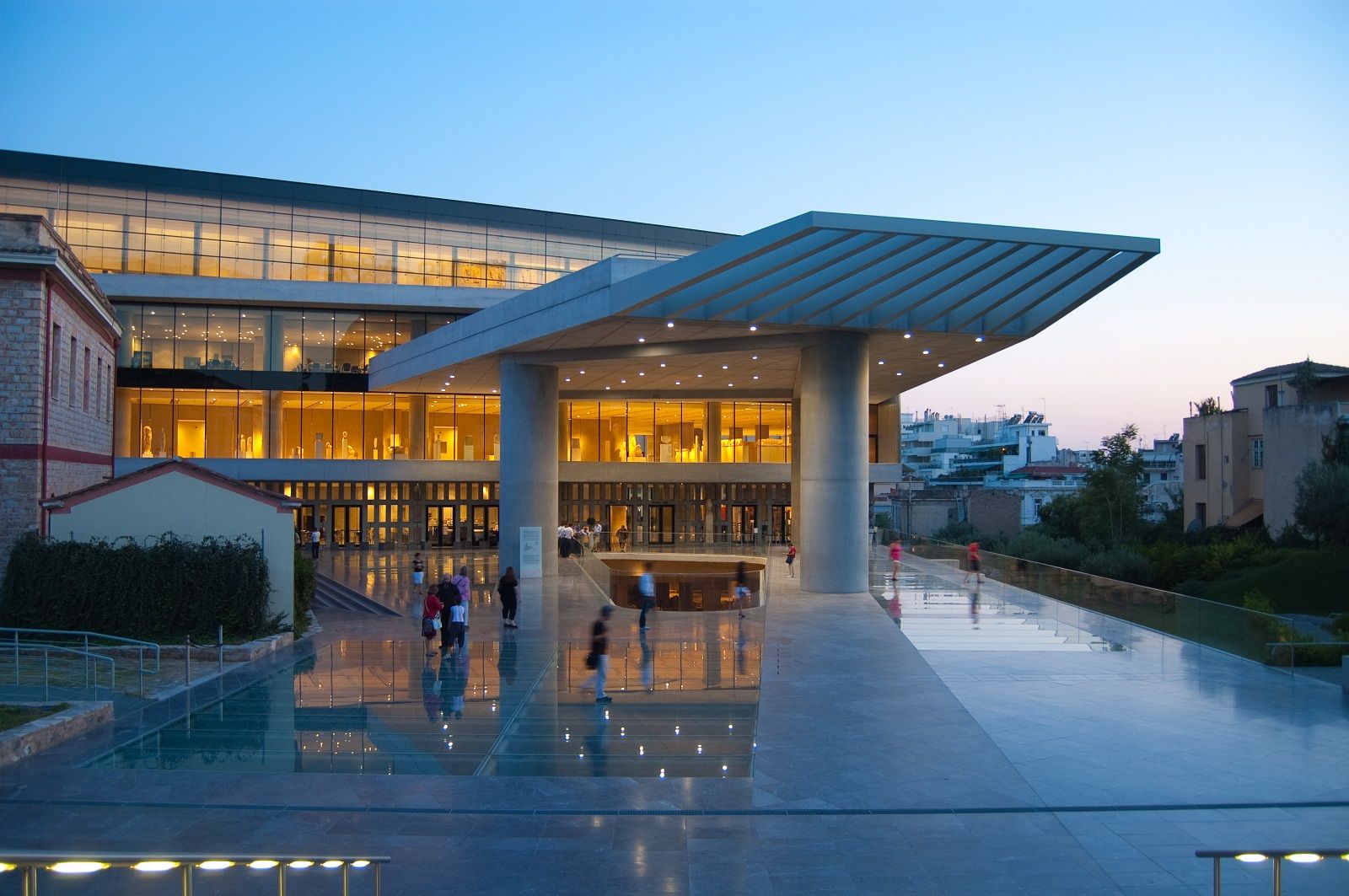 Walking farther along the pedestrian road you arrive at the Ancient Agora, which was the commercial, political and religious center of ancient Athens.  A visit to the archaeological site will give you the opportunity to become acquainted with the workings of Classical Athenian democracy.

From there, via Ermou Street, you arrive at the Kerameikos, the largest cemetery of the ancient city, with impressive tomb sculptures and stelae.  The Iridanos River, sacred during antiquity, runs through the archaeological site.

However, our tour of enchanting Athens does not restrict itself only to these unique archaeological sites. 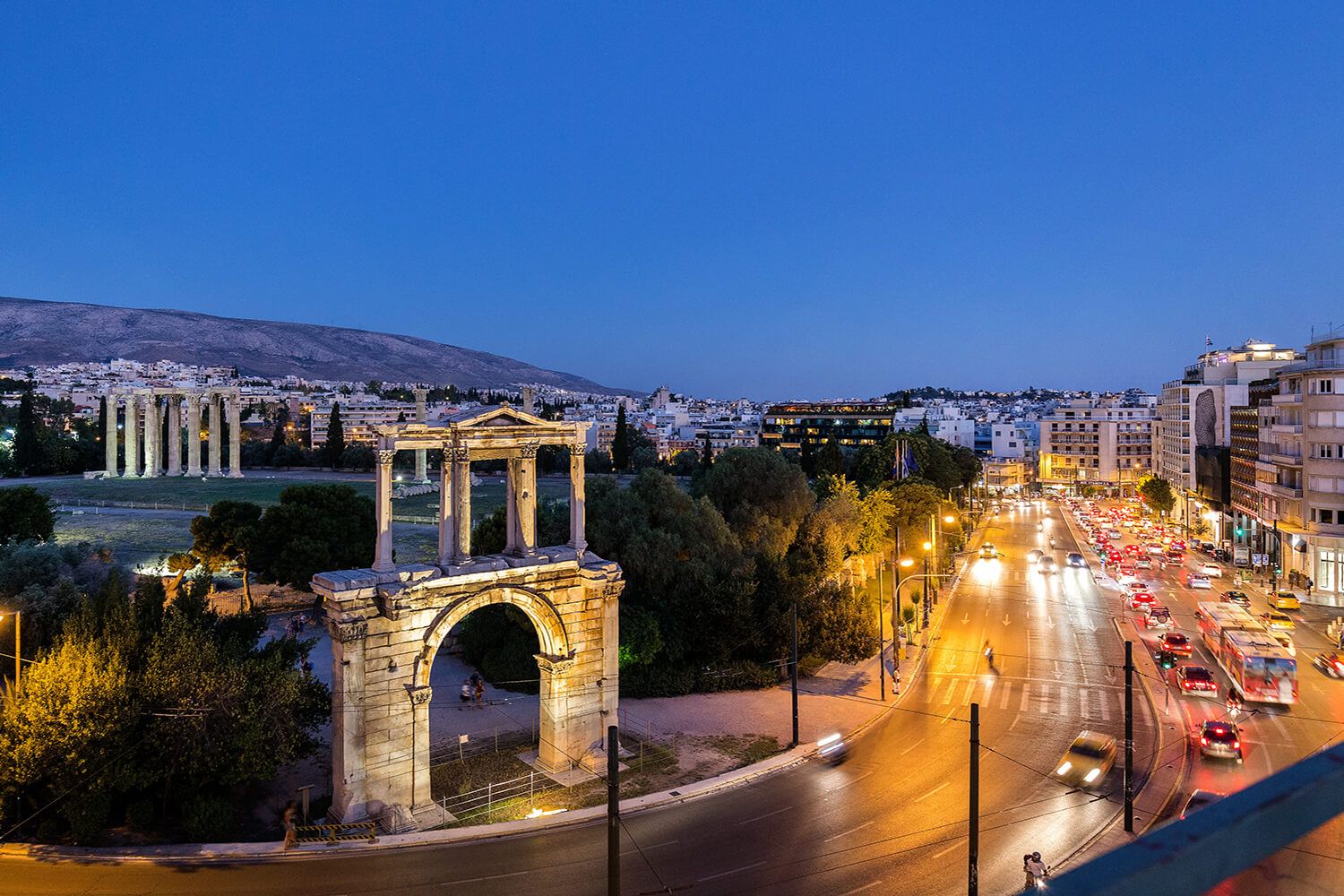 Around  neighborhoods of the historical centre

The “core” of the historic centre is the Plaka neighborhood (on the eastern side of the Acropolis), which has been inhabited without interruption since antiquity.  When you walk through the narrow labyrinthine streets lined with houses and mansions from the time of the Turkish occupation and the neoclassical period (19th c.), you will have the impression of travelling in a “time machine”.

You will encounter ancient monuments, such as the Lysikrates Monument, erected by a wealthy donor of theatrical performances, the Roman Agora with the famed “Tower of the Winds” (1st c. B.C.) and Hadrian’s Library (132 A.D.), scores of bigger and smaller churches, true masterpieces of Byzantine art and architecture, as well as remnants of the Ottoman period (Fetihie Mosque, Tzistaraki Mosque, the Turkish Bath near the Tower of the Winds, the Muslim Seminary, et al.). 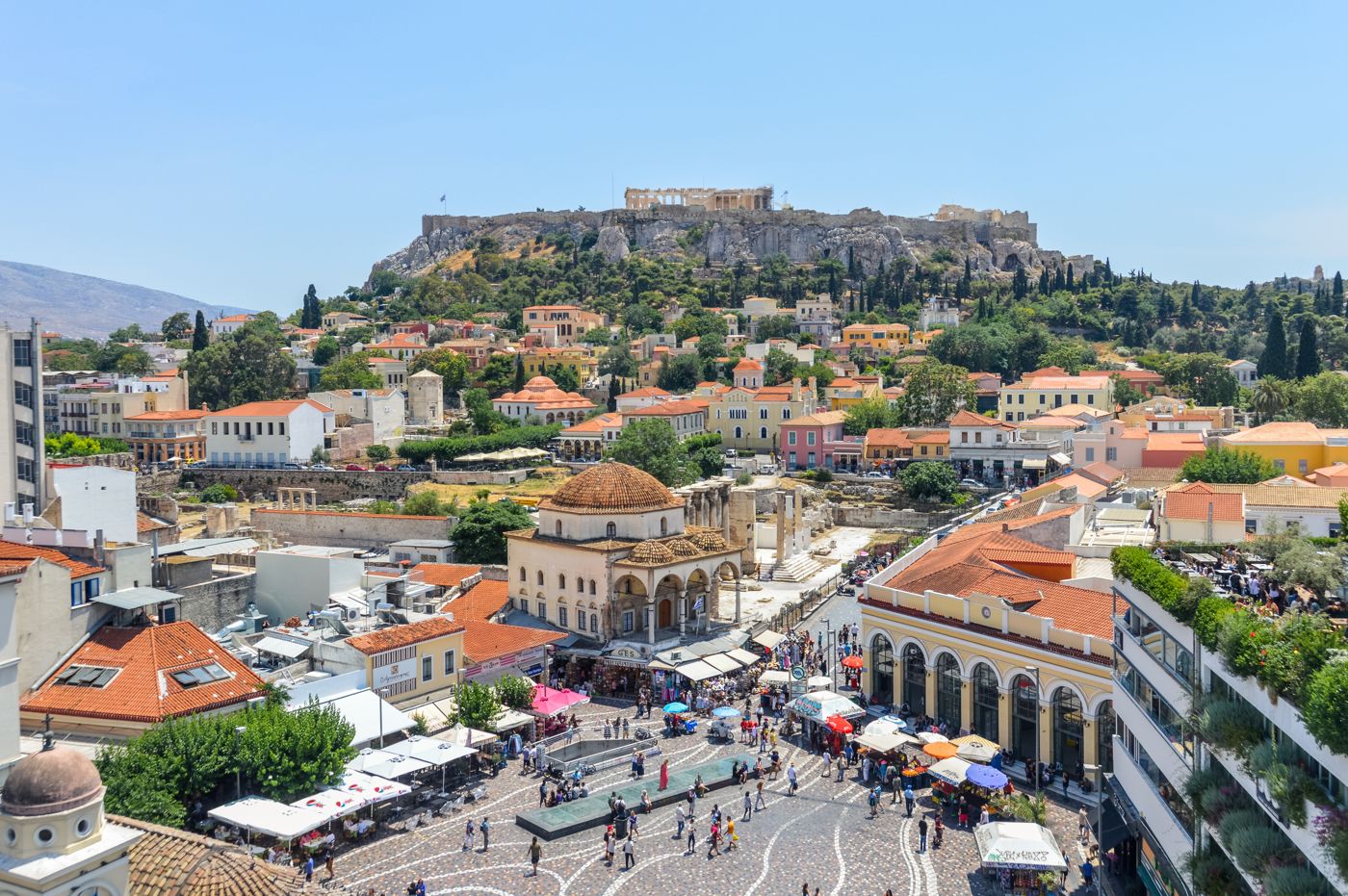 Continuing from Plaka you arrive at Monastiraki, a characteristic area of “old” Athens, with narrow streets and small buildings where the city’s traditional bazaar (Yousouroum) is held.  Close to it is the Psyrri area, a traditional neighborhood which during the past few years has evolved into one of the most important “centers” of the town’s nightlife, with scores of bars, taverns, ouzeris, clubs, etc.

Syntagma and Omonia are the main central squares of the town; they are linked by Stadiou Street and Panepistimiou Avenue, along which some of the town’s most beautiful Neoclassical buildings have been erected.  Dominating Syntagma Square is the Greek Parliament building and in front of it the Monument of the Unknown Soldier, guarded by the Evzones in traditional costume.

From this square starts the beautiful National Garden (40 acres), south of which stands the impressive Zappeion Mansion (1874-1888). From there you can continue towards the Presidential Mansion (1897) and thence to the Panathenaikon (Kallimarmaro) Stadium, where the first Olympic Games in modern history were held (1896).

From there, crossing the Mets neighborhood, the road leads you to the First Cemetery, the oldest one in Athens, basically an outdoor sculpture display with a wealth of wonderful monumental tombstones by some of the most important sculptors of the 19th and 20th centuries. 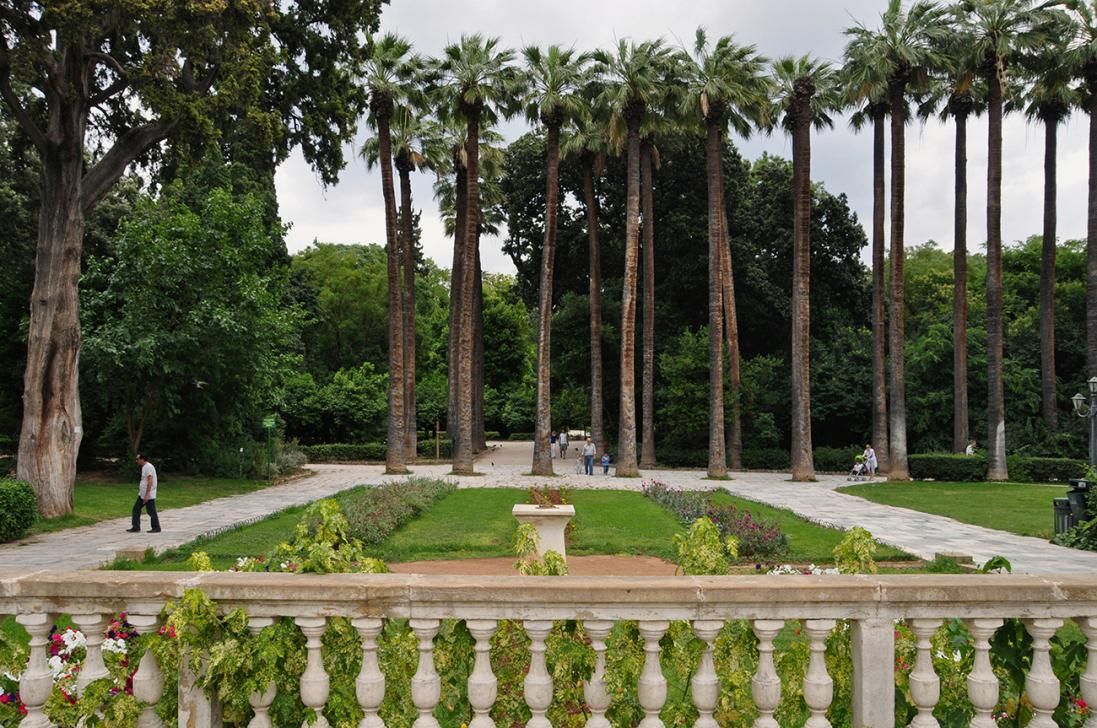 From Omonia Square starts Patission street, a busy street with interesting buildings, amongst which are the Neoclassical mansions of the Polytechnic School and the National Archaeological Museum, which ranks among the leading museums in the world and hosts rare art treasures from the Neolithic era up to the Roman period.

Thanks to its rich morphology Athens has plenty of places where you can admire stunning panoramic views of the city. Romantic or not, let yourself be captivated by the Athenian cityscape as seen from above. 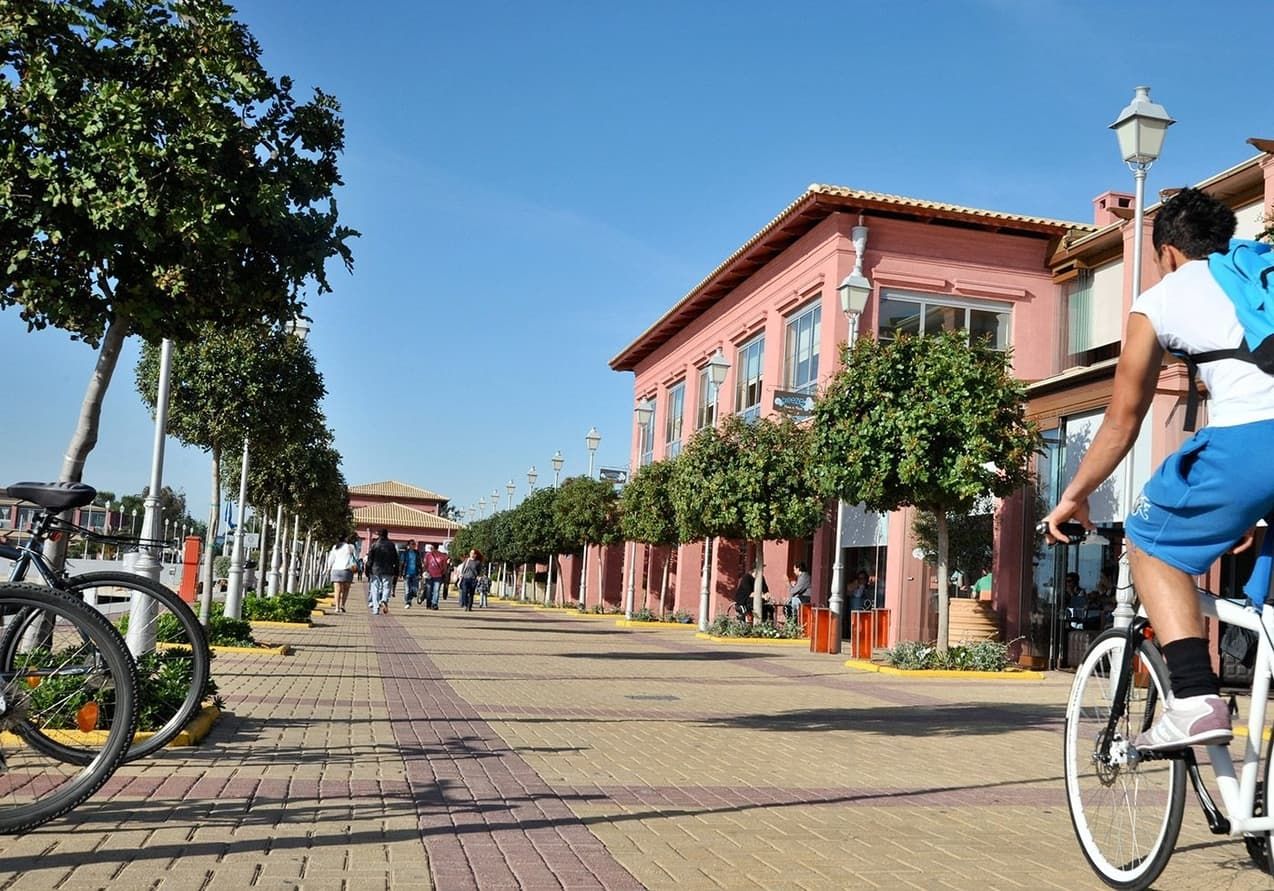 The southern suburbs, located on the coast of the Saronic Gulf, a recreational and cultural park is being planned, comprising the existing sports facilities.  They offer many opportunities to take a walk along the seaside, while you will also find many beautiful organized and free beaches, large shopping centers and nightclubs (especially during the summer).

In the Maroussi suburb (north of the center) are the facilities of the Olympic Athletic Center of Athens, where the majority of the athletic events were held during the 2004 Athens Olympic Games.  Kifissia (north of Maroussi) is also worth a visit, with its beautiful villas and impressive mansions.

Moreover, if you wish to leave the center behind you, you may visit, amongst others, the neighboring town of Piraeus, Greece’s main port (which nowadays forms one big conglomerate with Athens), the Daphni Monastery (11 km. west), one of the most significant Byzantine monuments of the country (12th c.) with unique mosaics, the Kaisariani Monastery (5 km. east), which was founded in the 2nd century, the Temple of Poseidon (5th c. B.C.) on Cape Sounion (58 km. south), following a wonderful route along the coast, the area of the battle of Marathon (490 B.C.) with the Tomb of Marathon, the archaeological sites of Eleusina (23 km. west), of Amphiareion (48 km. northeast), of Vravron (38 km. east) and Ramnous (close to Marathon), as well as the wonderful surrounding mountain massifs of Parnitha, Penteli and Hymettos, all suitable for hiking.

In Athens and the wider Attica area, you will find hotel accommodation of high standard, modern means of transportation, a wide choice of opportunities for shopping, dining and nightlife, good service but above all the hospitality and warmth of its inhabitants.

In a nutshell, Athens is a city that fascinates every visitor, during all seasons.

Below is a list of all services offered by Asklepieia Health Cluster. Click on each one to see further details.